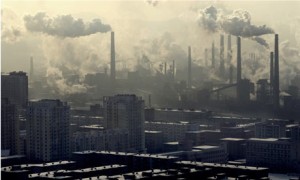 On most issues China is not only defiant, but openly disobedient. Environmental issues in China are no exception. Despite many western propositions and standards, the Chinese have decided they do not care much for the environment or any protocol that should be followed. There are a number of ways that they openly disregard motions set by global commissions and organizations, but pollution and deforestation are among the two worst.

Pollution remains one of the worst environmental issues in China. As recently as 2009 China overtook the United States as the world’s top emitter of fossil fuels at 7,710 metric tons (25.4%). America stood at only 5,420 metric tons in that same year.

It is true that China is the largest country by population, but their disregard for environmental issues is baffling to many onlookers and critics. Much of China is actually arid desert so it makes no sense that the Chinese would be polluting their air and land so freely. Nonetheless, they have industrialized their cities so much that spending a day in Shanghai is supposedly comparable to smoking a pack of cigarettes.

One of the reasons that China is such a poor protector of the environment is their reliance on coal. They consume the most coal in the world and do so without regard to Kyoto Protocol that they have ratified. They are not bound by the agreement, unfortunately, which makes for a difficult situation.

While China agrees that they should try their best to eliminate pollution, they have not taken the necessary steps to prove they are willing to do so. The rhetoric from the Chinese Communist party bigwigs is less about curbing their own carbon emissions as much as it is about pointing the finger towards America and historic pollution levels. Their main argument is that Americans pollute more on a per capita basis than do the Chinese.

While this may be true, many American pollution standards have prompted companies to change their ways and innovate the way they do business.

The Chinese are a developing nation with an insatiable appetite for raw materials. They also have large forests that can provide much of the material that they need. Therefore, within the last decade or two, the country has begun a large-scale campaign to use all the forests in the country for the development of the country.

While this may be economically good for the nation, it is detrimental for the Chinese environment and that of the rest of the world. The carbon emissions from deforestation are far worse than other types of emissions. They also leave China with less oxygen providing trees while they add the additional emissions into the air.

Hopefully the western nations will be able to put enough pressure on China to change their nonchalant environmental policy, but the future looks gloomy. The rate in which China is growing is too fast for the governmental bigwigs to allow any alteration of the current production. It may be many years before anyone sees a better environmental policy from China.